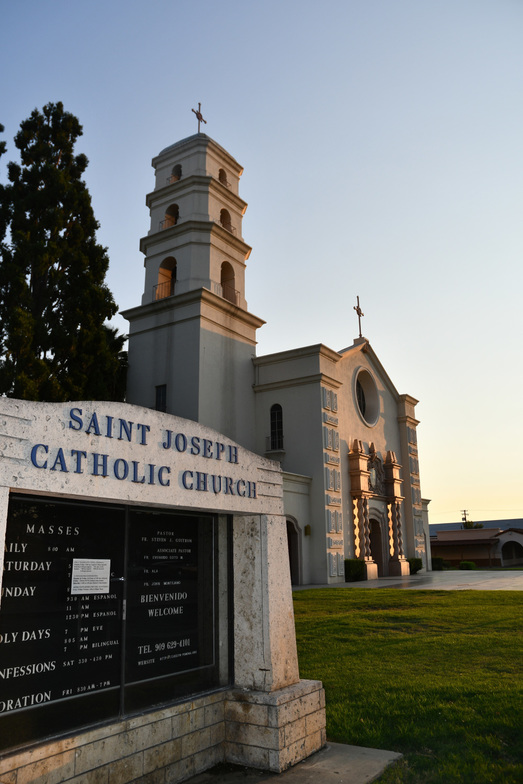 St. Joseph Church is the historic mother parish of the entire Pomona Valley. In 1771, when Mission San Gabriel Mission was founded, this area was named Rancho San Jose. When the Missions were secularized in 1834, Ygnacio Palomares and Ricardo Vejar were grantees of the Rancho. Padre Jose Salvidea blessed the land on St. Joseph's day, March 19, 1817, under a huge oak tree that stood on the 400 block of Kenoak Street.

In later years, a large room in the Ygnacio Alvarado adobe accommodated all the services. Following the establishment of the townsite of Pomona in 1875, the parish of St. Joseph was then established as a mission station and embraced all the territory from Azusa to Cucamonga, but it was not until 1886 that the parish had a resident pastor and its own edifice. It was located on the southwest corner of Ellen and Libbie Streets, now Park and Monterey, on property donated by P.C. Tonner, Pomona's colorful pioneer teacher, and poet.

The Rev. P.J. Fisher was appointed Pastor and soon became actively interested in the growth of both the parish and city. After a survey in 1896, Father Fisher found that many Catholic children were attending boarding schools elsewhere. In 1898 he invited the Order of the Holy Names of Jesus and Mary (of Oakland) to come to Pomona. The former George Reeves property in the 500 block on West Holt Avenue was chosen as the site of the new school, the Academy of the Holy Names. The formal dedication of the Academy was held on September 11, 1898, by the Most Rev. George Montgomery, Bishop of Monterey and Los Angeles.

Father Joseph Nunam succeeded Father Fisher in 1902. Father Nunan appointed a committee to make plans for a new church. The cornerstone for the new church (at the comer of Holt Avenue & Wisconsin Street) was laid by Msgr. Hartnett in June 1906. The handsome brick edifice of old Normandy style continued to house the parish services until the present church of impressive mission Mediterranean style, which was dedicated in 1956.