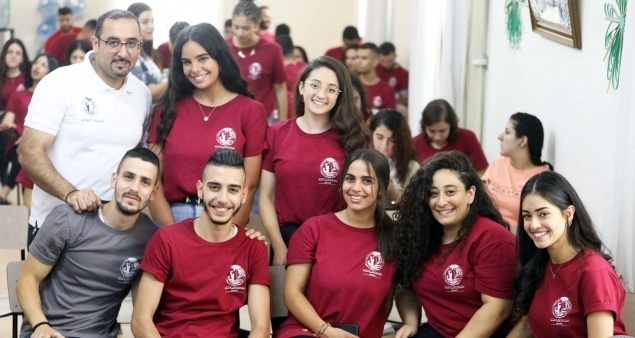 BEIT JALA – On Wednesday, August 8, 2021, the General Secretariat of The Youth of Jesus’ Homeland - Palestine (YJHP), concluded its 4-day summer camp entitled “My faith x7” for the youth of the University Group, which was held at Cremisan Monastery in Beit Jala.

The camp began with a Holy Mass presided over by Fr. Remon Haddad, Vice-assistant of YJHP. Fr. Bashar Fawadleh, Chaplain of YJHP, concelebrated the Mass. In his homily, he gave an overview of the camp, explaining the meaning behind the chosen title, which is understanding faith through the seven Sacraments, as the four-day camp dealt with the subject of the Holy Sacraments in detail, touching upon the way Christian youth live these Sacraments in their daily lives, and the steadfastness in the Christian faith.

On the first day, the teams were divided into discussion panels and a lecture was given on the Sacraments and the understanding of their role in people’s lives. The day concluded with a contemplative evening and a candlelight procession through the monastery bushes.

On the second day, Fr. Issa Taljiyeh, from the Greek Orthodox Church, gave a lecture entitled “Marriage and the Christian family”, in which he stressed on the significance of the family, choosing the right partner, and preparing for this new stage of life.

The second day of the camp included Q&A and other challenges between the groups. Rafi Ghattas, General Secretary of the YJHP, presented a lecture entitled “Christian and Revolutionary?”, in which he discussed the idea of revolution in the Bible, explaining the possibility of being a Christian and a revolutionary at the same time, defending one’s rights against injustice.

Mrs. Nadine Bitar Abu Sahlieh, member of the Coordination and Development Committee, gave a lecture entitled “With or Against”, which included a number of discussion panels on different daily topics, and their interpretation from the Holy Bible. The youth later headed to the Bethlehem Convention Palace where they attended a “Dabkeh” performance by “Baladi” group entitled “Talid”, celebrating the 30th anniversary of the founding of the group. The second day of the camp concluded with a contemplative prayer in the manner of the Taizé Community.

The third day started with a Holy Mass celebrating the Feast of the Transfiguration of the Lord, which was presided over by Fr. Bashar. In his homily entitled “The Priest and the Eucharist”, he emphasized the relationship between the Sacraments of Holy Orders and the Eucharist, the interrelationship between them, and the significance of the priest’s interaction in his parish. The youth was then anointed with blessed oil, in reference to the Sacrament of the Anointing of the sick.

After lunch, a lecture was given on the Sacrament of Confession and the importance of reconciliation with God and oneself, and the comfort that this Sacrament brings to the human spirit. On the same day, Mr. Fadi Batarseh, Director of the Cremisan Winery, welcomed the youth who visited both the Monastery and the winery, in order to learn about fermentation methods, methods of production, preservation and distribution of wine.

Upon their return, the members participated in many unique and artistic handicraft activities. In the evening, a small play and a lecture entitled “Revival” were presented by Deacon Bob Boulos. Later in the day, an entertainment evening was held which included several competitive challenges.

On the evening of the third day, the youth participated in a treasure hunt inside the courtyards of the monastery and its vast forests. In the end, everyone was able to reach the same conclusion, which is that the true treasure is Jesus Christ incarnated in the Sacrament of the Eucharist.

The camp’s nights concluded with an hour of a Eucharistic Adoration of meditation, prayer and confessions with the participation of the Shepherds Band from Beit Sahour, represented by Mr. George Salsa’ and Tia Qumsieh.

The General Secretariat of YJHP concluded the camp on Saturday, August 7, by hosting Mrs. Nelly Faddoul, a certified trainer in the field of human development, who addressed the issue of empowering young people to know and appreciate themselves, as well as their personal view of values and beliefs, and their impact on their lives. She also shed light on the role of each member in life, and discovering their mission and goal in order to find happiness. Finally, evaluating it, the participating members exchanged opinions about the camp.

The camp concluded with a Holy Mass presided over by Fr. Bashar, who stressed in his homily the phrase “My faith x7”, which means “I am a believer and a disciple”. At the end of his homily, Fr. Bashar thanked the participants for their commitment and the University youth committee for the efforts put into the success of the camp, hoping that the fruits of this camp would be reaped by witnessing them in the daily lives of each of the members.