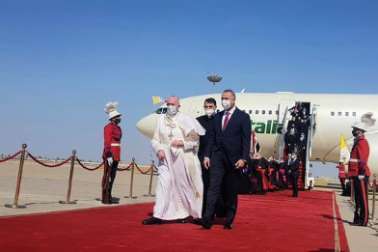 BAGHDAD—Pope Francis on Friday began a densely scheduled visit to Iraq fraught with public-health and security risks, his first trip outside of Italy in more than a year.

The pope is seeking to support Iraq’s beleaguered Christian minority and pursue his signature cause of better relations with the Muslim world, despite the country’s spike in Covid-19 infections and continuing violence.

“I am coming as a pilgrim, as a penitent pilgrim, to implore from the Lord forgiveness and reconciliation after years of war and terrorism, to beg from God the consolation of hearts and the healing of wounds,” Pope Francis said in a video message broadcast on Iraqi television Wednesday night.

follow the Pope trip to iraq live on Vatican News.